They Had Goat Heads by D. Harlan Wilson

D. Harlan Wilson’s collection They Had Goat Heads (© 2010 Atlatl Press) almost explodes in your hands. The author’s deft and rapid-fire writing style reaches critical mass in seconds and a literary event of cosmic magnitude occurs. Then you realize you were standing too close: you’re not in real time or space anymore.

Years ago I was lucky enough to review Wilson’s collection, The Kafka Effekt (© 2001 Eraserhead Press), and that, my first experience with the irreal, was a trial by fire that barely prepared me for exposure to his latest. 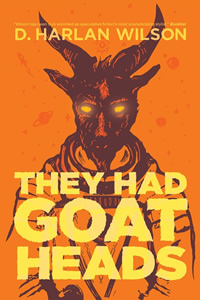 The 39 stories in They Had Goat Heads sprint, machine-gun and warp the reader to places where normal rational thinking would never dare go and you begin to wonder, as things progress whether the collection might actually cause brain damage. One thing is certain, you will come away from the experience knowing you have read a cutting-edge piece of literature: the images are stimulating and resonant, in manifold ways unique and strangely familiar.

But I don’t want to hang They Had Goat Heads with the label ‘literature’ because it seems immune to the staid and predictable conventions often associated with the form. Wilson’s collection flies in the face of such simple categorization.

For those unacquainted with Irrealism an expansive explanation can be found at the Irreal Cafe in G. S. Evans’ essay entitled: “What is irrealism?” More succinctly, essayist Dean Swinford has described Irrealism as a “peculiar mode of postmodern allegory” that has emerged from the chaos of a deconstructed medieval system of symbol and allegory.

In other words, preconceptions need not apply. We limbo under Freud’s cigar: realistic expectations, interactions, fetish and symbols go out the window. These are transformed into something that resembles the intimate and often ambiguous realm of dreams and the unconscious—but it is more a reflection than resemblance.

They Had Goat Heads is breathtaking. The reader is swept from genre to genre as a torrent of provocative images either hurtles past or impacts and bonds at the molecular level. There’s no escaping once it starts. The stories dodge in and out of reality, touching on persistent themes of repetition, media and technology, all of it interwoven with human DNA and its evolutionary design.

By using recurring images of family, destruction, death and recreation, Wilson effortlessly plays with cerebral fun as in “Monster Truck” or shifts to the rather touching absurdity found in “The Whale – with a Surprise Alternate (Happy) Ending!!!” One comes away feeling as though the flexible word-play represents an ever-plastic quality of the universe and somehow gauges the limitless potential of sentience.

Perhaps that’s why a nagging feeling persists. The stories feel so familiar. Why are they impossible to resist? In hindsight, the first hint of this déjà vu came in the second story, “The Movie That Wasn’t There,” in which the narrator is drawn into a movie melodrama that is unfolding around him. Wilson’s collection does a similar thing. There is an inclusive and unavoidable identification that thrums throughout and makes the book impossible to simply read, there is complicity in every line.

They Had Goat Heads bombards the reader with exciting ideas and disturbing imagery plucked screaming from life and nightmares. You’re drawn in because you’ve seen it somewhere before: in your subconscious.

They Had Goat Heads is the equivalent of having dream surgery.