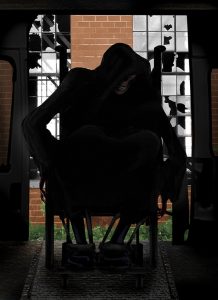 “After the Biters skinned him his rinsing compulsion was gone. He was lucky and didn’t catch the dermatophagia as Biter victims often did. Instead he had anxiety attacks set off by damaged nerves registering phantom pains and sensations. At such times his throat closed, his heart hammered and he was crippled by an overwhelming urge to seek cover … to hide. The attacks were a manifestation of his damaged condition and awareness that he was a skinless freak that should be dead. It wasn’t the Variant Effect; it was perfectly natural terror. Hyde’s doctors hadn’t expected him to live. He frequently laughed to himself that they were about ninety percent right.”

“Biters traveled in hunting packs, working together, seeking out relief for their discomfort as a group. They communicated with gesture and body language, and by the varied vocal expression of their single obsession: ‘Skin.’ They used the word: hissed it, barked it, and howled it for everything. ‘Skin’ kept the pack together on the hunt. ‘Skin’ focused them on their prey. Close proximity to other Biters led to violent interaction. Skin fights. They settled scores and worked out the pack hierarchy by getting into each other’s faces.” 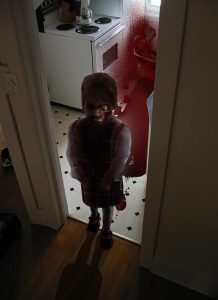 “Skin eaters had to work fast to reach alpha status before their injuries killed them. That competition ripped scarlet slashes across their faces; skinned their naked chests and bodies. It was awful what they did to each other. But often the squad got there when the Variant had just taken hold. When they still looked like people in the neighborhood. That’s why the squad got cranked. And getting caught was bad, of course. Losing was not an option you could contemplate without a head full of something. But winning was impossible to face clean and sober. The skin eaters still looked like people at first, and without the Variant Effect, you knew they would still be people: sitting down to dinner, going out for a drink, reading a newspaper or singing at a third grade Christmas Concert.”