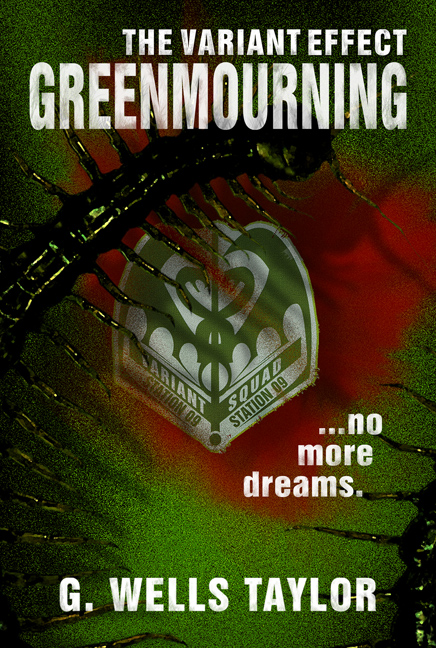 Currently available for $3.99 at

While Hyde hunts for a Variant-enhanced serial killer, a fight with a skin-eating granny almost sends Borland back into retirement. Skin eaters, secrets and murder close in as the squad scrambles to contain the Variant Effect.

Taylor’s story takes place in a post-apocalyptic anytown, where chaos and violence are the norm, and force replaces civil or common law as a means to maintain order.  With a twist straight from the book of Revelations, the dead have stepped from their graves and into a society that isn’t prepared for the influx.  A worldwide miscarriage has ended the possibility of new births (human or animal), and the living are unable to die. Death by natural causes is a gift denied to the masses; it takes an act of extreme violence to end life in this particular world.

It makes sense that from this dismal soup emerges private detective Tommy Wildclown, a whiskey-swilling sleuth in perpetual clown face.  Tommy is hired to solve a dead lawyer’s murder and in the process stumbles upon a conspiracy involving an assortment of undercover authority figures, corrupt businessmen and shallow opportunists.  With his dead partner, Elmo, Tommy unearths a secret that could bankrupt a flourishing afterlife business and give the masses an alternative to their collective dismal existence.

Taylor’s mix of detective fiction and gothic horror and Biblical lore make this story engaging and fresh.  When Graveyards Yawn is well paced, with incredibly vivid description and clever narrative.  Taylor’s storytelling compels the reader to take part in the process.  The action is well written, the dialogue realistic, and the detail so precise that every scent, every injury, becomes part of the reader’s existence.

When Graveyards Yawn is the first installment of Taylor’s Apocalypse series.  The follow-up books, The Forsaken and The Fifth Horseman, are currently being primed for publication.

Review by Michelle Boucher of Creature-Corner.com

Set in a bleak and tawdry vision of a twisted future, the world is still recovering from “the Change”, an undetermined yet obviously cataclysmic event. The world is a dog eat dog kinda place (more than it can be now, if you can picture that nightmare). It’s still full of the same sort of political dirtbags, scam artists, and rich elitists we’re all familiar with, but of a level and severity that can only come with the “end of the world”. Authority has literally become that. A capital ‘A’ establishment that cracks down on the unwholesome and criminal aspects of the new place the world has become, while at the same time pretty much acting as a model for those they arrest. Greasetown, the HQ for our hero Tommy Wildclown, is similar to 1930’s Hollywood in that it’s got the same compelling and dangerous romantic edge to it, but now it’s no longer a place worth living for. The effects of the Change have wrought irreparable damage to its citizens and the very soul of the city itself. Honesty, pride, and integrity are literally things of the past.

Aside from shady law enforcement, gangs of homicidal drag queens, and many other societal changes one would expect the world to experience after an apocalypse (no Thunderdome, go to Australia for that), the dead began getting up, walking around, and asking for their jobs back among other things. Long lost Rovers and Morris’s were also back and ready to wag their tails or bite the hand of an unsuspecting citizen, while the living animals that remained turned wise and no longer want to play nice with their human neighbors. The rich reside in gated communities where they cower or frolic in ignorance or without care, and the middle class live out their existences more closely with those of the undead, who have to fight for civil rights and humane treatment. The world’s a strange new place and adjustments are badly needed and obviously a long time coming. The dead are the new minority in this world.

On top of the undead predicament, living humans and animals no longer age or die. Sounds nice right? I suppose it can be if you’re amid the upper class, but try telling that to someone who’s existence was miserable and death their only reprieve, and just wait ’til you find out just how difficult it is to actually die (shiver). On top of this twisted, nightmarish, and wholly indigestible manna, there’s one last chilling morsel: no living creature can conceive. A mass miscarriage and a few decades later leaves the population living on veggie burgers, in fear of animals that have turned vicious and are no longer domesticated. And in the middle of it all, stands, or rather, unceremoniously tramples, Tommy Wildclown. A towering, drunken, belligerent detective who comes off quite a lot like Mr. Blonde (although with a kind of gritty integrity and a conscience), in full clown regalia. Throw him into this melting pot of the undead, gangsters, corrupt law enforcement figures, dames, never ending rain (now that’s a bitch), a ton of creepy postulations on what might happen if the world actually did end, tie it all up with one hell of a conspiracy, and you’ve got When Graveyards Yawn.

And while Wildclown isn’t exactly traditional hero fodder, here he is playing the part in an irreverent but effective and fun manner. Caught up in a “one thing leads to another” intrigue, Tommy careens through Greasetown and its neighboring cities seemingly without a clue, but more and more on the ball than he himself or any of his detractors might have imagined. And he’s got plenty of enemies to go around, threefold. Unwitting as Wildclown is to participate in the grand scheme unfolding before him, he nevertheless manages to get himself entangled in the mother of all secrets when he takes what appears to be a fairly cut and dry murder case. With the plot of his case getting thicker than spoiled milk vomit, Tommy’s also got his own personal mysteries to solve and demons to battle as well, and the author keeps the pace, characters, and events unfolding more and more at just the right times, keeping you locked in, awaiting that next big plunge into revelation

G. Wells Taylor has taken the detective/mystery genre to new and horrific territory here. If you’re into a well-wrought combination of post apocalyptic society and wacked out characters this is something you don’t want to miss. When Graveyards Yawn is like a vision the illegitimate son of Dashell Hammet and William S. Burroughs might have. I wonder if Mr. Taylor plays that William Tell game with a pretty lady named Myrna… 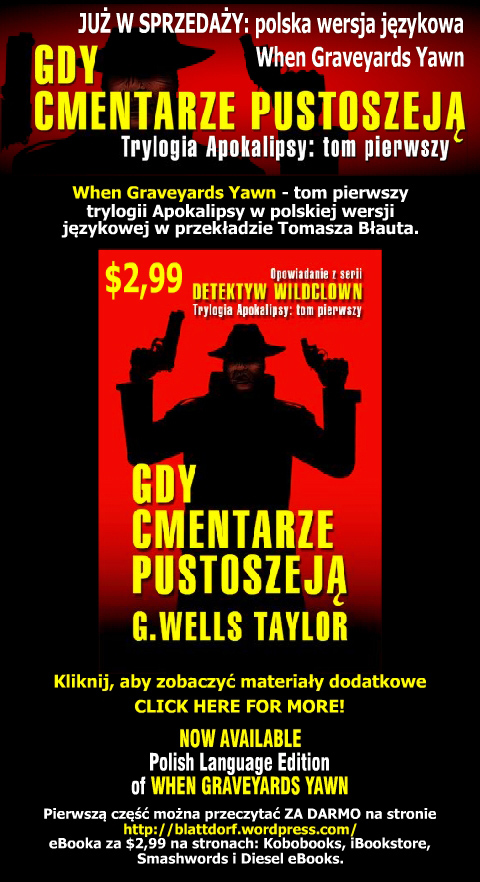 It is a real thrill for me to announce the release of
When Graveyards Yawn – Polish Language Edition
and to offer a sincere Congratulations to
my good friend Tomasz Blaut.

Tomasz Blaut is an English-Polish translator with a penchant for crime and horror stories, text-heavy games, political science books, and also various forms of comedy. He resides in the capital of Poland, Warsaw, where he dedicates his energies towards figuring out how to unravel the English language for the Polish audience, with flair.
Tomasz first proposed the translation project to me a short 9 months ago and then undertook the challenging task with relentless enthusiasm and unwavering professionalism.

Download the first part FREE at http://blattdorf.wordpress.com/ or purchase the complete eBook online for $2.99 at: Smashwords, and Apple Books.

Another Friday. Another Blizzard. Writing in Canada.

All right, I can say definitely now that an announcement concerning WHEN GRAVEYARDS YAWN will be coming very soon. (Do you have your FREE COPY?) I know, I jumped the gun before. Tech issues kept things from rolling out.

But we’re back on track. In fact, I’m editing web pages as I write.

Katherine delivers again with Discipline Problem. A Tale of the Misbegotten. Another great read!

My friend and editor Katherine Tomlinson has a new story
BRAIN FOOD published at EATEN ALIVE.

Friday update on books and blizzard.

I must fight my poor blogging skills. There is not a lot of interesting play by play when writing a book, so I generally just keep writing. But, I mustn’t forget my blog.

The When Graveyards Yawn announcement I’ve been talking about is close. Just  had to work out some technical hitches.

The Variant Effect: GreenMourning is proceeding nicely. I’d like to thank all those readers who’ve left reviews and rated the first in the series, the Variant Effect (and my other titles) at the different shops and at GoodReads. It can be a real shot in the arm when I’m burning the midnight oil, and I love the feedback.

A blizzard is threatening the town today. We’re at the edge so it will be for the winds to decide.

Some interesting developments on the way regarding
When Graveyards Yawn – Book One of the Apocalypse Trilogy. 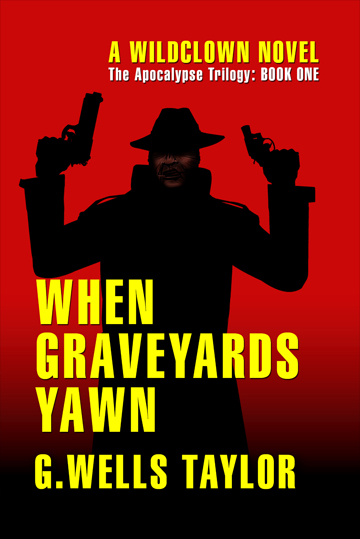 YOURS FREE at: GWellsTaylor.com, Amazon.com, Barnes and Noble, Kobo, Smashwords and  iBookstore.

Captain Joe Borland and the squad return to action in The Variant Effect: GREENMOURNING by G. Wells Taylor.

While Hyde hunts for a Variant-enhanced serial killer, a fight with a skin-eating granny almost sends Borland back into retirement. Secrets, murder and intrigue close in as the squad scrambles to contain the Variant Effect. 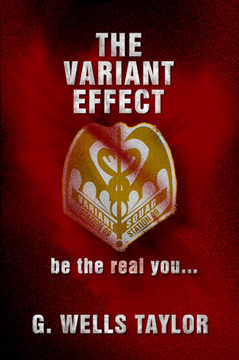 Get the first book the Variant Effect here, and read customer reviews
at Amazon and Barnes and Noble.